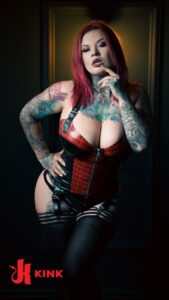 (Barcelona, Spain) Eastern European tatted, busty, red-haired vixen, content creator, fetish model, adult star, and entrepreneur Sabien Demonia continues to dominate the cam world with her Get Kinky shows in conjunction with Kink.com. And now the BCAMS Network Awards has nominated her for multiple coveted awards.
Over the weekend, the BCAMS Network Awards announced the nominees in Cam Site Platforms, Cam Studios, Cam Models, and Content Creators categories. Taking place during the BCAMS Expo, the 2022 BCAMS Awards are set for September 30th at the Grand Hotel in Bucharest, Romania. Sabien DeMonia has scored five coveted awards nominations for Best Female Cam Model, Most Popular Cam Model, Model Branding of Year, Best Social Media Brand, and Fetish Cam Model. And she’s asking her loyal fans and industry friends to #rockthevote for her.
Voting is now open through September 15th. To vote for Sabien, use the following links: Best Female Cam Model awards.bcams-expo.com/Voting/Category/53, Most Popular Cam Model awards.bcams-expo.com/Voting/Category/57, Model Branding of Year awards.bcams-expo.com/Voting/Category/56, Best Social Media Brand awards.bcams-expo.com/Voting/Category/54 and Fetish Cam Model awards.bcams-expo.com/Voting/Category/55. Let the Twitterverse know you voted for her by hitting the “Share” button. One vote per IP per day is allowed, and only one vote per group of categories. To view all the nominees, go to awards.bcams-expo.com/Voting. While you’re there, click on “Rules” for more details on voting.
“I’m honored to be up for almost every award in the Cam Models category—any and all of these would be incredible to win. But I need your votes every day to make that happen. Voting closes in a little more than 20 days, and you know what to do,” says Sabien DeMonia.
To interview Sabien DeMonia for your site, publication, or show, contact Erika Icon of The Rub PR at erika@therubpr.com.
ABOUT SABIEN DEMONIA
Eastern European tatted, busty, red-haired vixen Sabien DeMonia is a content creator, fetish model, adult star, and entrepreneur. Known for her wild scenes, GG breasts, and her even bigger attitude, she’s definitely one to watch. She got her start doing live studio and cam shows for Babestation in the UK. Once Sabien took it to the next level, she worked for some of the most extreme Euro and US studios, including Evil Angel, Fake Hub, Canal +, Alt Erotic, Fake Taxi, Marc Dorcel, Reality Lovers, Czech VR, VR Taboo, Perverse Family, Bikini Fanatics, Legal Porno, Lust Reality, Gonzo.com, AltPorn4U, and more. In 2022, she scored a contract with Kink.com as director and contract star.
In the past two years, Sabien’s become very well known in and out of the adult industry and scored countless magazine covers and features for worldwide publications like XBIZ, B.A.D.D., Bubble Shake, Inked Barbie, Kink Queens, Femme Rebelle, Tattoo Planet, Tattoo Kultur, Kinkd, and more. She’s won awards for Best Overall Model and Best Porn-Cam Model from Spain’s Ero Awards, Fetish Model of the Year from UK Glamour Awards, Clip Artist of the Year from the Bucharest Summit Awards, Best Live Cam Celebrity of Year from the Live Cam Awards, Best Gothic Shoot in 2021 and Best Inked Clip Artist from the AltPorn Awards, and MV Munkbung Vid of the Year from the ManyVids Community Awards. Sabien has received numerous nominations from XBIZ Europa, XBIZ Cam, AVN, AltPorn, YNOT Awards, Bucharest Summit, Live Cam, BCAM, and Inked Awards. She’s a Brand Ambassador for Hotline, Pineapple Support, and Gaming Adult’s Hentai Heroes, and previously was the first official Cherry.tv Ambassador, as well as representing xxxNifty and SugarBounce.
When she’s not producing content for her platforms or filming for top studios, you’ll find the globetrotting foodie/master chef in her kitchen whipping up culinary delights. Before adult, she was an ALT model and went to art school. She’s also appeared in a Harry Styles music video, appeared on UK’s Channel 5 on “Hotter Than,” and has appeared in The Sun.
Look for her official website sabiendemonia.com to officially launch later this year. Catch her two-hour Sexy Sabien Show for Get Kinky in conjunction with Kink.com Sundays at 1pm PST/4pm EST at getkinky.com/cam/SABIEN_DEMONIA. Buy a variety of her branded Fangear.vip merch at fangear.vip/models/sabien-demonia. Support her on multiple platforms, including OnlyFans onlyfans.com/sabien_demonia, FanCentro Fanclub fancentro.com/sabiendemonia, ManyVids SabienDeMonia.manyvids.com, and iWantClips iwantclips.com/store/790431/Sabien_DeMonia. Enjoy her free content and make sure to like and subscribe to her Pornhub pornhub.com/pornstar/sabien-demonia. Keep up with all her adventures on Twitter at @Sabien_DeMonia and Instagram at @sabiendemonia_. Find all her links at linktr.ee/CumAndGetMe.