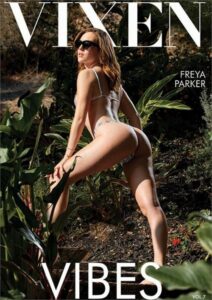 Exotic locales, incredible visuals that will take your breath away, intriguing stories and the sexiest women on the planet. That is what makes up this package from the folks at Vixen with another lush production helmed by four of the top directors in the adult industry. You are in for a very special treat with this release, so get your partner, snuggle up and be prepared to be royally entertained.

It opens with the very seductive beauty Freya Parker relaxing in an outdoor tub and recalling her story of her boss, Manuel Ferrara, and the mixed signals he is sending her. She knows he wants her, she knows she wants him, but he is married after all. So, what happens? He sees her in this outdoor tub and can’t take his eyes off her, she steps out and goes right to him with a big kiss, telling him she can be trusted with their secret. That pretty much seals the deal and after some kissing and caressing in this exotic setting it is off to the room for more privacy and more than just kisses. Manuel is an experienced veteran in the business and Freya an up and coming star and their chemistry is unmistakable as they really get into one all out, nothing held back encounter. Freya shows off her various talents and Manuel takes total charge as they both blend together to bring about a very powerful and passionate scene that makes for a great opening to this release.

Next up it is the fast rising Nicole Doshi, a very exotic and erotic Asian girl with a boatload of talent and personality. In this sequence she is a married woman who is also a nude model. She is posing for Quinton in his studio where he does exquisite charcoal renderings of his artwork. When the session is finished, rather than getting dressed and leaving, Nicole wastes no time making a play for him and letting him know she wants more than just posing. After some deep kisses Quinton is ready to give her all she wants and they get started. This girl really knows how to work it and this scene becomes more intense and passioned filled every stroke. In the end they both get all that they want when it comes to pleasure and need.

Beautiful women, chemistry laden sexual encounters, exquisite settings and locales all topped off with breathtaking visuals. That is the menu in this very tasty release that will have tremendous appeal to loving couples, so be sure to get hold of “Vibes 7” from Vixen, no disappointments here.