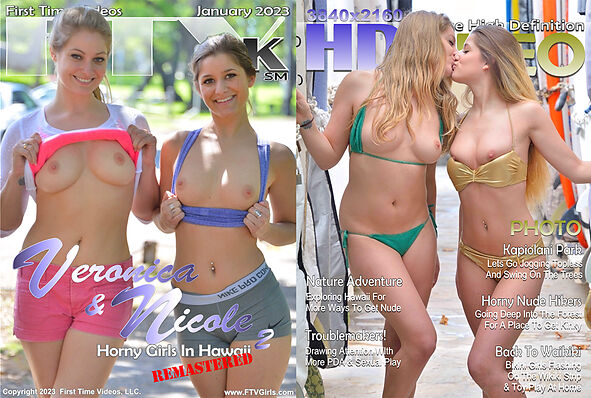 REMASTERED IN 4k for 2023! The Hawaii shoot continues, with the FTV sweethearts Nicole and Veronica visiting a park for a little sporty fun! Both girls are wearing cute jogging wear, revealing enough breast and butt to turn people on as they jog by. Of course, this is an FTV shoot so their breasts pop out and now they’re running topless and flashing their butt! Going through this popular Kapiolani Park, they swing on banyan trees topless, then get intimate with more kissing and topless acrobatics in the grass. They’re then off to a very exotic locale in a jungle trail near Pali, hiking through the super green and dense forest, holding hands and kissing when they can. Bit by bit, their tops come off, then panties, then everything else until they’re hiking completely naked and climbing downed trees & jumping off rocks. They find themselves under a great tree, and end up ‘finding’ a pair of long, skinny eggplants to play with. Veronica ends up using one on Nicole, doing her doggy style, then fingering her hard and spreading & gaping her vagina. Nicole returns the favor, until Veronica takes control and pounds herself hard to what seems an orgasm from an eggplant? As if on cue, the weather gets stormy and heavy rains begin. They manage to run back to the car wet and naked, and decide to flash and wave to the traffic going by all in the nude! After drying up, they have a change of clothes, putting on cute dresses and visiting a park with a lot of stray cats. No panties, and we peek up the girls’ short dresses while they bend over to play with the cats… Later that night, the girls take over the camera, going out and recording each other on the Waikiki strip. Flashing at the restaurant they’re eating, going to the mall, showing their boobs to the guys nearby, even masturbating at the beach at night (Veronica ends up finger banging herself on the beach, and ends up squrting)! The next day, they travel to a busy tourist area full of Asian architecture. Wearing those cute short dresses again, they flash right in front of the tourists, then make out and get very frisky with each other right there! Some tourists like what they see, others take pictures, and some just look plain upset. The girls want to visit the beach again, so we see them in casual wear, going to the very busy streets on the strip. They end up making out and sucking on each other’s breasts right out in the open, getting extremely risky with their public nudity! Eventually a very angry fellow chastizes them, and the girls run off, disappointing all the guys who were enjoing the view. Then the girls end up on Waikiki beach right next to the lifeguard stand, and take their tops off to tan topless in the sun. If that isn’t enough, they get frisky all over again, get completely naked and spread away! This gets the girls horny, and they end up going home to masturbate. As they cuddle, Veronica masturbates with her glass toy, ending up with a strong orgasm and squirting all over the balcony! Nicole then uses the Eroscillator Toy to a very strong orgasm with visible vaginal contractions as Veronica watches from the balcony. She then fingers Nicole to test how wet she’s become, and taste her juices… And so ends another Hawaii adventure, with two fun loving girls that ended up with some very sweet chemistry together.