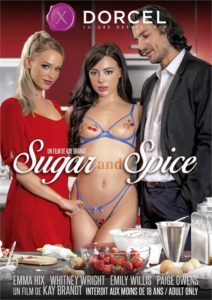 Aside from being a writer and film critic, I have also been a big fan of Marc Dorcel films and Kay Brandt and her extraordinary directing and writing of adult films beginning with her critically acclaimed Cherry series. Now, with Ms. Brandt becoming a collaborator with the Dorcel group it is a match made in porn heaven bringing these two incredible talents together for some exhilarating and fascinating U.S. productions. With this release that combination turns out another winning masterpiece of adult entertainment that will have immediate appeal to couples. With a solid story line, realistic dialogue, lush, well appointed settings and high octane, steamy, sizzling sex scenes, you have everything you need to get your jam on with this explosive film.

Emma Hix and Jay Smooth play Tina and Justin a very liberated, modern thinking, very active and busy couple. Their lives are so filled with work and pleasure they have little time for the necessities like cooking. So they set out to hire a personal chef who can take care of all that for them. Whitney Wright plays the personal chef and during the interview process Justin is also giving her the once over and Whitney picks up on it. This where the style of Whitney Wright, as an actress, comes into play. She can give off that demure, shy, surprised, almost embarrassed look. But at the same time she can turn it into a smoldering sexually charged look as well. Needless to say, Jay hires her to be their personal chef, but he has a lot more planned for her aside from cooking in the kitchen. Whitney is well aware of it and plays along until the time is right because she knows this couple is very open minded and are players.

So she moves into the house, meets Tina and along the way some of their friends like Emily Willis, Paige Owens, Ramon Nomar. Robby Echo and Stirling Cooper, who all play their supporting parts to the hilt. She knows that Tina and Justin are a very sexual couple and sees it with her own eyes as she basically has the run of the house as their live-in chef.  Seeing some of the play that takes place really gets to her and we relive some of it as we watch Whitney masturbate in some steamy solo action. It doesn’t take very long before Whitney gets seduced into the action with Emma and friend Paige and from there it just becomes more and more of a frenzy of sexual activity that comes into her life thanks to this free wheeling couple. The culmination of this well done story is when Tina and Justin invite all their friends over for a big party, Of course by now, Whitney has become part of the play so when this p[arty erupts into a full blown orgy, she is right there to meet the challenge and really let her sexual self go. Once again, but in a more subtle way, food and sex definitely go together.

Well crafted in every way, a solid, top notch cast that really delivers, a realistic story line, well paced direction, tremendous visuals and sizzling sex. It is all here wrapped up in a big red bow for you to enjoy. There is no question the Dorcel/Brandt coupling is going to lead to the French company doing a lot more films in the U.S. I certainly recommend getting hold of “Sugar and Spice” it will be worth your while.

Vote for this film and all your other favorites at:  https://nightmovesonline.com/vote-now/