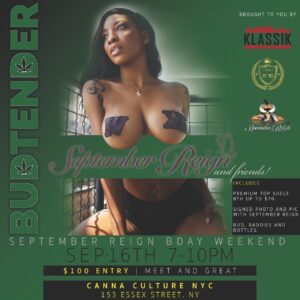 “My birthday is on September 15th but I spent it doing media appearances, but now I am ready to party,” says September. “I am looking forward to celebrating this weekend and I hope my fans will join me!”

She has a free-spirited mind, killer looks, big hair and even BIGGER personality. She’s making waves within the adult entertainment Industry.